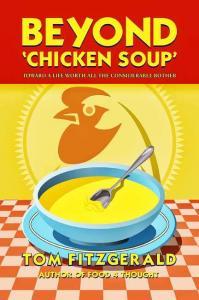 Back Story – Beyond Chicken Soup

Back in the mid 1980’s, my wife Laurie and I, both of us afflicted with the same existential malaise, began to attend weekly ACOA (adult children of alcoholics) meetings in the basement of a local church. There was only one rule – ‘What is said in this room stays in this room’ – and no obligations, other than to put your chair away at the end of the meeting. Attendees could either talk or remain silent, as they wished.

My wife and I, both of us painfully shy, chose to listen – to the same people, week after week, say the same things, over and over. One young woman in particular seemed stuck in an infinite loop of perceived failure and self-loathing; hopelessness and despair. After a few weeks of bearing witness to this woman’s torment, one could fairly get the impression she was actually wallowing in her misery.

At about this same time, in reading Thomas Moore’s Care of the Soul, it suddenly occurred to me, in a bust of celestial light, that narcissism was not a healing art. One did not achieve heaven, wholeness, or happiness, I sensed, by caring for one’s own soul, but by caring for someone else’s!

Beyond Chicken Soup began about 35 years ago, under a different title, as a sort of counterweight to what was being promoted at the time by the prophets of the ‘Take Charge of Your Life’ and ‘Have It All’ movements. Over the years, as in the case of its facilitator, it evolved.