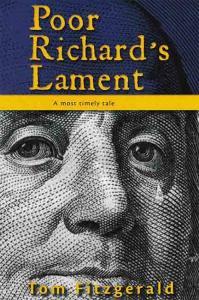 Back Story. In the summer of 1993, I granted myself a one-year sabbatical. I was burned out from working extra jobs to put three sons through college and my wife through graduate school, and I wanted to try to jumpstart a writing ‘career’ that had pretty much gone fallow since the early 70’s, when I had published three novels. I had recently made the last of six years of tuition payments, and I had sold a small windfall of ‘friends & family’ stock just before it became worthless.

Over that summer and into the fall, I spent almost every afternoon reading in the backyard, after writing for several hours. One of the first books I turned to was Ben Franklin’s Autobiography. I don’t recall exactly why; only that I had long felt a sort of kinship with Franklin, because of his aphoristic mind. (At this point in my life, I had been writing original aphorisms for my own amusement for about 25 years.)

I was not far into Franklin’s unfinished memoir when my writer’s mind kicked in: What if Franklin came back?

I envisioned a rollicking ride of a novel, 250 pages in length, requiring maybe nine months to write. I made a few notes, set them aside, and resumed completely wasting my sabbatical.

It wasn’t until eight years later, on August 2, 2001 – the day after I was laid off from a job requiring a daily commute of 142 miles – that I returned to Franklin. I was out of work, my wife Laurie and I had moved to an area of New England where my soul-sapping trade (technical writing) had little currency, and I was running out of time in which to make it as a self-sustaining (career) writer. A rollicking tale centering on Mr. 100-Dollar Bill seemed just the ticket.

Mr. 100-Dollar Bill, however, as it turned out, had other plans.

Over the next several months, as I read biography after biography; and plunged ever deeper into Franklin’s original writings (which Yale University had thoughtfully collected into 36 volumes), Franklin gradually transmuted from a fairly superficial figure of legend and lore into a compelling, flesh-and blood, larger-than-life persona who oft times, especially when I was at the keyboard, essentially merged into my own self. In effect, we entered into a sort of partnership. There was no contract between us, of course, only a sort of tacit agreement we would allow our joint venture to go where it might.

After almost nine years of birthing pains, often horrific, sometimes ineffable, we delivered in concert what I could not have delivered, even envisioned, alone. Exhausted at this point, and dispirited – not a single agent would even look at the manuscript – I plunged into an abyss well familiar to me. One day, out of the blue, I received a 3-page letter from Michael Zuckerman, Professor of History at the University of Pennsylvania. Three months earlier, out of desperation, I had sent the full manuscript to him, uninvited, asking for a review.

He granted my plea and then some. Among the extraordinary things he said in those pages, was this: “A grand and gorgeous book!  I devoured it! The pleasures of prose, passion, and intelligence pervade these pages.”