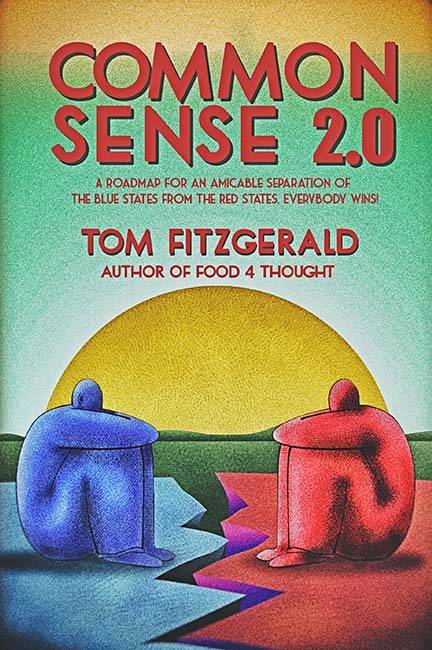 Written as a modern-day Common Sense (in nearly the same number of pages), this diminutive volume offers the kind of bold thinking and radical reform increasing numbers of Blue State Americans are becoming receptive to. Release: Summer 2019

By way of a little Dickensian magic, this unexpected work of fiction stands the infamous Inquisition on its head. Galileo becomes the examiner and the Catholic Church, represented by ‘the archbishop’ (of Boston), becomes the examined. The primary backdrop is the Sistine Chapel on the eve of the election of a new pope.

Papal Dreams is a fantasy in the tradition of Dickens’s A Christmas Carol. And although it benefits from the dynamism and pathos that typically characterize fiction, it also benefits from the gravitas and authority that typically characterizes nonfiction. Galileo Galilei and Giordano Bruno, the latter burned at the stake for heresy, are very much their corporal and spiritual selves in these pages. Release: Spring 2019

The Malthus Agenda – a Novel

Chet Renfro, a syndicated science columnist, succumbs to an apparent heart attack while on a shuttle flight from DC to Boston. He had been following up on an anonymous tip alleging involvement of a large defense contractor, the TRM Corporation, in drug trafficking and money laundering on a massive scale.

Avery Higgins, the former special assistant to the founder of the TRM Corporation, is found floating in the Potomac – an apparent suicide.

Jesse Crider, a 31-year-old gamer and professional student, on the cusp or being awarded yet another academic degree, is mysteriously invited to attend a conference on global security issues in Washington, DC. The conference is to be hosted by Hugh Krauthammer, Vice President of Strategic Systems at the TRM Corporation. Following the conference, Krauthammer offers Jesse a job as a security analyst at an eye-popping salary.

Once ensconced at TRM, Jesse learns that the founder of the company, Dr. Everett Forbusher, referred to as ‘The Doctor,’ has an office on the top floor of one of the three TRM towers, but has never been seen there, or anywhere else for that matter.

Karen Danziger, member of a shadowy crime-fighting organization, approaches Jesse and asks him to help her find out what’s going on inside the TRM Corporation. Karen shows Jesse a cryptic note that Chet Renfro, the now-deceased science writer, had received before his demise, and asks Jesse to decipher it. Jesse, as inveterate puzzle solver, can’t resist the challenge.

The Malthus Agenda is a timely tale that, in a heart-stopping moment of truth, confronts Jesse (and the reader) with the ultimate dilemma: Whether to save humanity by destroying all but a select few of its profligate numbers (as the god of the Old Testament did in Genesis), or allow humanity to eventually destroy itself, along with most of the other species on the planet.

The realism here is nothing short of terrifying. Release: Fall 2019

A Private Agony – a Novel

T. Cooper Meacham is summoned to his doctor’s office late one afternoon and handed a death sentence. He has ALS (Lou Gehrig’s disease), a fatal motor-neuron disorder affecting the voluntary muscles. He will gradually lose function throughout his body — arms, hands, legs, throat, lungs, sphincters — until there is no function left to lose. The average life expectancy at diagnosis is two to five years. Over most of this time, Cooper can expect to be able to do little more than bear witness to a gradual transmuting of the gold of his promise into the lead of his fate. He is 40 years old, deeply in love with his wife of fifteen years, and the father of three beloved sons.

What if you were the one called into the doctor’s office? How would you respond? If you were Cooper Meacham, you would attempt to run the Boston Marathon before it was too late to do so. To have even a ghost of a chance of actually crossing the finish line, however, you would need to gain muscle function between Present Day and Patriots Day at the same time you are involuntarily losing it. You would need to approach every moment of your life as if there were no tomorrow.

Why would anyone put himself through this? As we follow Cooper on the grueling 26-mile, 385-yard trek from Hopkinton, Massachusetts, toward the finish line in downtown Boston, we learn Cooper’s reasons, and find ourselves increasingly conflicted between wanting to cheer this grievously afflicted man on and wanting him to stop. If he does not stop, we come to realize, he will die. If he does stop, there will be no tomorrow. Release: Spring 2020